My 23-month-old son can barely say a handful of words and yet he has made phone calls, sent text messages, and left Voxers for my friends and family on numerous occasions.  I don’t worry about my friends and family getting random communication from my son, but when I arrived at my hairstylist’s studio and she asked me if I had a Special Needs child, I realized my son’s calling habits were getting out of hand. 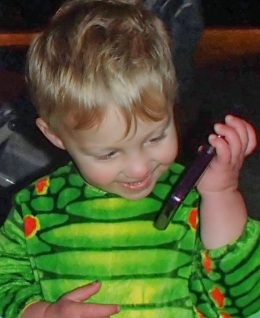 The phone calls got so frequent that my Dad and Step-Mom tried to divert my son’s attention with a Thomas the Train cell phone.  It never works that way though, does it?  Those little stinkers know the real thing when they see it.

I was at a loss as to what to do about my son’s rampant communication efforts with my phone.  I have no problem with him playing with my phone.  It’s all the havoc that he causes once he has it that concerns me.  I have an App on my phone called Toddler Lock, which I highly recommend, but he has grown tired of that ploy as well.

That’s why a simple interaction with my friend the other day was so eye-opening to me.  My friend offered up her phone to keep my son entertained and I tried to caution her about his calling habits and she simply responded, “No, it’s okay, I’ll put it on Airplane Mode.”  Whaaaaat?!  Why did I never think of this?

Sometimes I’m such an inside of the box kind of girl that I don’t even contemplate looking outside of it.  I just assumed Airplane Mode is used for when you’re on an airplane.  Case closed.  The whole concept of Airplane Mode saving my son from communications while on solid ground was mind-boggling to me.  Now when he takes my phone, I simply turn my settings to Airplane Mode and all communications and radio signal options are cut from the phone’s capabilities.

So, while it’s not an earth-shattering find, it is a find worth sharing.  Even if there is just one Mom out there that can rest easy knowing her toddler is not making calls to her husband while she’s explaining said husband’s upcoming surprise party to her friend, then this post has made a difference.