I find human nature amusing at times, don’t you?  The first scene of the movie He’s Just Not That Into You

is a perfect example.  It shows a little girl being bullied at the park by a little boy.  The little girl then goes up to her Mom to explain the events and the Mom’s response is, “That means the boy likes you.”  Wait, what?  Being mean is an indication of liking someone?!  I recall, in my own youth, being told that if a kid was being mean to me it’s a sign that they are jealous of me.  This brings me back to my first statement that us humans can be an odd bunch sometimes.

My examples above are that of kids, but some of our backwards behavior carries on into our adulthood.  Are you ready for my true confession of discordant thinking?  I take you back to the first year of my marriage.  This is when a disturbing behavior of mine was brought to my attention.  I don’t exactly recall the specifics of how it came about, but I quickly gained the nickname “Red Pen” from my husband.  The name was an indication of my constantly correcting everything he did.  You may recall the orange slicing incident from my previous post Celebrating Differences?  He’d also respond to some of my remarks with a simple, “Put the gavel down.”  This was his delicate way of saying I needed to quit unrighteously judging him or the circumstances around me.  In short, I was being unkind as well as a micro-manager.  The latter being an annoying habit for sure, but harmless for the most part.  Or is it?

It turns out that I was increasing the frequency of my “Red Pen” behavior when I was feeling a lack of control over myself.  I didn’t really make the correlation until I was sitting in a therapy session a few years back.  I was confessing to my therapist that I tend to point out all of my husband’s faults and short-comings.  She, being a therapist, immediately recognized this behavior as a sign of my own insecurities.  My insecure nature had already been recognized as the root of a large portion of my struggles so I’m sure this behavior came as no surprise to her.  Then she pulled a typical therapist move on me.  She went and said something I had heard a million times before, but had never internalized or applied it to myself.  Her response to my confession was simple, “You can’t fix yourself by breaking someone else.”  Wait, what?  You can’t?  Because somewhere along the way I subconsciously made this a truth.  If I wasn’t able to feel good about myself, then surely I could make my husband feel worse or bring him down and that would somehow put me up higher, right?  Wrong. 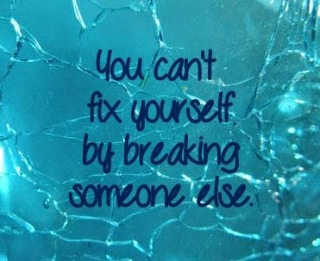 Oh, how sad of a way to behave.  How terrible I felt when I realized that I had been breaking my husband down in a failed attempt to lift myself up.  I took the therapy session to heart and began trying to right my wrongs immediately.  It must have worked successfully because I was just telling my husband about the topic of this post being that you can’t fix yourself by breaking someone else and he promptly responded with, “You don’t do that.”  I had to remind him of our first years of marriage and then he said, “Oh yeah, that happened.”  Unfortunately, the micro-managing sneaks back in to our relationship when I am feeling less than optimal about myself.  Thankfully, it doesn’t escalate in to me trying to break him down or point out all of his flaws, as I’ve learned to reel myself in and see the situation for what it is.

It’s tough to redirect ourselves from these unhealthy behavior patterns that somehow get ingrained in us.  Obviously, nobody taught me this behavior specifically.  I was not pulled aside as a child and told, “You know what would make you feel better about yourself?  Bringing others down.”  But I did have to be directly told to NOT act in that manner.  And what about the other behaviors I mentioned above?  A kid who bullies being an indication that he likes you?  Or is jealous of you?  Huh?  That is an odd way to show your admiration or affection for someone.  What happens to the person that buys in to that way of thinking and ends up in a harmful relationship with someone who treats them in such a manner?

This brings me to my final thought, which leaves me recalling a line from the movie French Kiss.  The main character, Kate, is frustrated with the manner in which the French share their emotions in an opposite fashion to their true feelings and exclaims, “Happy, smile.  Sad, frown.  Use the corresponding face with the corresponding emotion.”  My final thought echoes that of Kate’s: Let’s use the corresponding behavior for the corresponding results.  If you want to feel better, be kinder and better.  If you want to feel love, show love.  Let’s strive to lift one another up in an effort to make the world a happier place rather than bring someone down under the falsehood that we will somehow be lifted higher.  Let us compliment people and magnify their strengths, not their weaknesses. 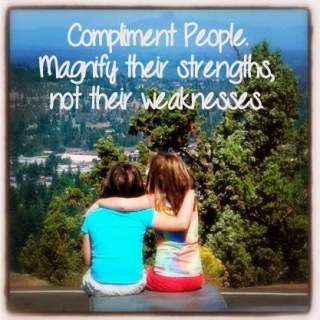 I learned that bringing my husband down did not make me feel any better about myself.  I must have been disillusioned into thinking so, as I had made a habit of it, but it was not the reality.  I often felt worse about myself, as I was bringing unnecessary contention into our home.  However, lifting him up and lifting others up around me actually does make me feel better about myself.  Joy begets more joy.  I know this to be true because there is more joy, understanding and compassion found in our marriage now than when I was trying to fix myself by breaking him.

May we each begin to recognize the true happiness that is felt within when we lift others rather than break them down.