Yes, yes, I know, irony and perspective are neither a cool product, nor a nifty craft, nor an interesting website.  It is, however, what I happened to find this week.  A whole heap load of irony and perspective.  You see, I resolved to gain greater patience in 2015, as mentioned in my last post Run with Patience.  In that post, I mentioned that I was a bit fearful to resolve to do such a thing, as often this quality is improved upon by encountering opportunities to exercise it.  Well, the first day of 2015 provided me with my first practice rounds.  This may make for a loooooong year.

I was slightly irritated when I finished feeding my baby his breakfast and I heard my toddler son saying to himself, “No Lego Movie,” repeatedly.  My irritation raised quickly when I found said toddler taking the brand new The Lego Movie

that the family had just received for Christmas and running it along our stone fireplace.  I haven’t played it yet to verify, but I’m pretty sure a movie is done once there is an elaborate scratch pattern that covers the entire play area of the DVD.  I put him in timeout, but quickly realized there wasn’t too much point in getting upset with him, he didn’t know he was causing harm to it.  Hopefully I explained it well enough that he now understands.  We shall see.  Patience Test #1 passed.  Whew.

Fast forward to my errands with four kids in tow.  Things were going fairly smoothly.  Aside from the hiccup of one store being closed, we were actually having a pretty good time making our many stops.  The last stop of the day was Target.  We were all in high spirits and I was letting the kids be goofy and have some fun with the cart.  We were all just loving life.  We came upon the cereal aisle, which happened to be having a sale.  I was looking closer at the cereal options in my effort to see what the kids might like best when I saw it! Quaker Honey Graham Oh’s!  This might not mean much to you, but it meant a lot to me.  It was less than two months ago that I had gone on a hunt for this cereal and learned that it is now only sold in two stores: Target and Rite-Aid.  I had checked both of those stores at that time and neither had the cereal in stock.  I even got in touch with Quaker in an effort to get my hands on a box and they said it had been 6 months since they had sent it to Central Oregon.  So, you see, this was a seriously amazing find!  So much so, that I wanted to take a picture and send it to a friend of mine that I knew would appreciate it.  I got my phone out, went to take the picture, dropped the phone, and that’s the end.  Done.  The screen cracked and the phone would no longer respond to my touch.  Patience Test #2 was an immediate fail.

As I was trying to fuss with it to see if I could make it work, I quickly grew impatient with the kids.  Our fun times ended abruptly.  I didn’t let anyone touch the cart because every move they made irritated me.  I surrendered to the circumstance without putting up a fight.  I honestly thought I could cry.  I get that it’s JUST a phone.  But, it also happens to be a phone that I had just recently got in October, which already had been returned TWICE due to camera issues and I was not certain we had insurance on it and I was already feeling overwhelmed by the post-Christmas-financial blues.  The LAST thing I needed was another $700, as that’s what these babies cost without some sort of deal, out of my pocket.  I somberly finished my shopping while checking my phone every few minutes to see if it had changed it’s mind and decided to work.  No such luck.

Thankfully, I did recognize this as an opportunity to practice patience.  I tried desperately to let it go knowing that there was nothing that I could do in that very moment in Target and taking it out on the kids would get us nowhere.  I even managed to chuckle on our way out to the car when my daughter showed me an oil puddle that had made rainbow colors in the shape of a Target symbol.  Once we were in the car, I felt so bummed out that I told the kids we were going to pray.  I prayed that the phone could be fixed, and that if it couldn’t be fixed, that it could be replaced at a minimal cost, and that if that couldn’t happen, that I could have peace in my heart.  I wish I could say peace came immediately, but it didn’t.  So off to Verizon we went.  Does anybody else hate going into cellular stores as much as I do?  It seems like it takes so much time to get anything accomplished in those places.

The phone was officially deemed kaput and I began the mourning process.  Thankfully, my husband had put insurance on our phones, but it still meant a $149 deductible and a wait period of at least two days.  I’m not gonna lie folks, I felt so discouraged and upset with the situation.  I realize it’s just a phone, but the money, time, and failure to not succumb under trial, as I had just resolved to do, got the best of me.

At the end of the day, as I was feeding my baby and still dwelling on the irony of my day in relation to my resolution, I also happened to find perspective.  Accidents happen.  They suck.  Some are absolutely tragic and have a lasting affect.  I found myself recalling news stories from this past week and my heart ached for those who have suffered far greater loss than my stupid phone situation.  It almost makes me more upset with myself that I let it get to me so much in the first place. 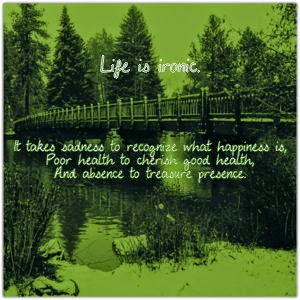 So, I hope you’ll forgive me for losing sight of the big picture, for thinking at such a worldly level, and for not being an example of patience.  I truly hope to improve upon this quality and I find myself grateful for all that I do have in my life.  Top on the list of things I’m grateful for is my husband with whom I am celebrating 11 years of marriage on this very day.  I feel so blessed in knowing that we will be together for time and all eternity and a $149 deductible will have absolutely no bearing on that blessing. 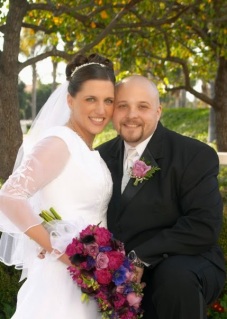 Now, if you’ll excuse me, I’m going to go sing The Lego Movie theme song in my effort to embrace the positive.  EVERYTHING IS AWESOOOOME!!